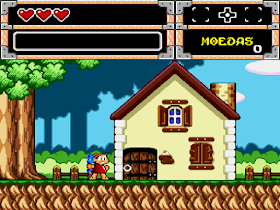 The game mixes RPG matches with platform game. Monica travels through Fantasy Country visiting villages and killing monsters with her bunny Samson. She can also buy new equipment along the way through coins left by the defeated monsters. Each monster carries different amounts of coins, which increase as you progress through the game. You can reclaim hearts of life through various means: killing monsters, using jars of potions, opening chests or sleeping in hotels. In the latter, Monica can recover all lost life hearts, but prices increase in the more advanced stages. Besides Sansão, Monica has other equipment such as shields, armor (not visible), boots (also not visible) and spells.

Monica went to visit her friends in Fantasy Country, but upon arriving there she had a huge disappointment, because the country had been invaded by an army of monsters and she was the only one capable of defeating them. After leaving the house, Monica meets with an old lady who tells all the facts that occurred in the kingdom: the princess Magali had been kidnapped, Cascão was lost and Cebolinha was hidden in the Happy Village. The old woman gives Monica an elixir and a fire magic so she could fight the monsters.

Upon arriving in Vila Feliz she came across several mushroom monsters that were invading the village. Inside a house he met with Chive that said the Angel was waiting for her. When he met Anjinho, he told Monica where the monsters hiding was, and made the beetle-fairy Priscilla accompany her to help her in the adventure. Inside the hiding place, Monica finds a flute and returns to the Happy Village. Chives then teaches her 3 songs that serve to open the locked doors of the hiding place. After unlocking all the doors of the cave, Monica faces Mama Mushroom and defeat bringing peace back to Happy Village. Then, Monica returns to speak with Anjinho, who tells her that her next destination would be to enter the Pink Castle and save Princess Magali.

After entering a secret passageway in the sky, Monica walks down a long corridor full of monsters until she meets an evil gentleman who wanted to kill her. After defeating him, Monica meets Magali, who after being released returns to the castle and opens it so that Monica can enter whenever she wants. Upon entering the castle she goes towards the throne room, where Magali stands for being the Princess. She thanks her for her bravery and sends her to her next destination: the Crystal Village.

After going through the marsh monsters and slime slugs, Monica manages to get to Crystal Village, but ends up receiving the terrible news that Bidu had been kidnapped by the tribe of Dirty Feet cannibals. Monica goes out looking for Bidu and saves him from turning to Dirty Feet dinner. Upon arriving at Villa Cristal, the owner of Bidu let him go with Monica, so that he opens the passage of the old temple next to the Villa Cristal.
‹
›
Home
View web version