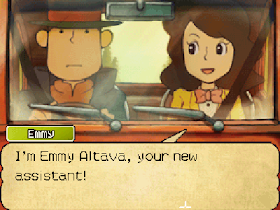 Genre: Puzzle
Narrative: Detective / Mystery
Published by: Nintendo of America Inc
Developed by: Level-5 Inc
Released: 2009
Platform: Nintendo DS (NDS)
The game includes, only in the American and Japanese versions, also an RPG known as "Life of London" which can be unlocked after the conclusion of the puzzles.

After receiving a mysterious letter asking for his help, the professor is invited by an old friend to go to Misthallery, a city on the water characterized by frequent fog and where strange events are happening. In fact, in the village it seems that a huge spectrum is destroying all the buildings piece by piece, appearing only during the fog and accompanied by a mysterious music. In this adventure, the first chronologically speaking, Professor Layton will leave only from his university office and then meet during the unfolding of Emmy events, with which he will travel to Misthallery. In the plots of the plot, this being a prequel, the first meeting between the professor and Luke Triton is also told.