Harry Potter and the Chamber of Secrets (PS1) 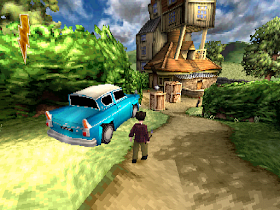 Genre: Action
Perspective: 3rd-person
Setting: Fantasy
Published by: Electronic Arts
Developed by: Argonaut Games PLC
Released: 2002
Platforms: PlayStation (PSX, PS1), Game Boy Color (GBC)
The gameplay of the game is presented in the form of an arcade with a review from a third person, combining simple elements of the quest. Between the mandatory story tasks, the player can learn the secrets of the castle, participate in Quidditch tournaments, and also attend the Club of Duels. For participating in mini-games, exploring the territories of Hogwarts and searching for hidden places, the player receives bonuses - the magic candy “All-Taste Bertie Botts Candy”, which serve as a kind of currency at Hogwarts — you can buy collection magic cards, potions and healing of chocolate frogs, as well as sports equipment from Fred and George.
Unlike the previous game, there was a free movement around the school between tasks - after each test a player can return to secret places in Hogwarts and his yard, as well as re-do some tests and look for cards in classes where lessons are held and other places. Also spell tests are conducted for a while, i.e. Gryffindor scores extra points for their quick performance.

Summer holidays. After his first year of study at Hogwarts School of Witchcraft and Wizardry, Harry is again forced to live in the family of Dursley relatives. He had not received letters from his friends, Ron and Hermione, despite the promise they had made to write.
On the twelfth birthday of Harry, Uncle Vernon (not remembering the holiday date) receives guests, potential business partners. He tells Harry to sit quietly in his room, not showing himself to those who have come. Suddenly a strange creature appears in the room, who presents himself as the house elf Dobby and warns him that he will be in mortal danger if he returns to Hogwarts. Dobby admits he stole letters from friends because he didn’t want to endanger Harry. Harry insists that he will return to Hogwarts, with the result that Dobby makes a stir in the house, spoiling the welcome party. Dursley is locked in a room by Harry, moreover, a warning letter soon arrives about the inadmissibility of using magic outside of school.
One night, his old school friends, the Weasley brothers, Ron, Fred and George, arrive at Harry's old Ford motorcar. They help out Harry from prison and take him to their house, which they comically call Nora.
It is time to go shopping before school. Harry and the Weasley family go to Diagon Alley. There he meets his friends, Hagrid and Hermione. In the bookshop, they have a conflict with Draco Malfoy and his father Lucius. From Mr. Weasley, Harry learns that Malfoy Sr. was accused of having links with Volan de Mort. In the same book shop, Harry meets the famous writer Zlatopust Lokons, who informs him that he will now be the new teacher in the Protection against the dark arts.
At the station "Kings Cross" the Weasley family and Harry ride on Ford England. Harry and Ron should get on the secret platform of wizards last, but they fail to do it: the barrier through which they must pass does not let them. In despair that they may be late, they take Father Ron's car and fly to Hogwarts on it. Arriving there, the car accidentally crashes into the Rattling Willow. Harry and Ron, running late, run to the castle.
School days begin. Harry goes to lectures and works out the punishment for his lateness, responding to the mail of Zlatopust Lokons fans. After the next evening, spent for the "punishment", Harry hears a strange whisper, which is published from the walls. Later, walking along the corridor with Ron, Harry hears the same whisper and even distinguishes some words, but Ron replies that he heard only some hiss.
There is a grand opening of the Club Duel. The first participant in the magic duel is Harry, and his rival is Draco Malfoy. In a fight, Draco uses an unacceptable spell and summons a living snake. However, contrary to the idea of ​​Malfoy, the snake attacks one of the spectators. Then Harry discovers his ability to command serpents and orders the serpent to leave the apprentice alone. The public reacts strangely to his actions and looks at him with suspicion. After the fight, Ron tells Harry that he seems to be a snake. This is the name for the rare ability to talk to snakes, which were mostly possessed by dark wizards, among them Volan de Mort, the killer of Harry's parents.
Later, Harry Potter is confronted with mysterious events: someone turns the inhabitants of Hogwarts into stiff statues, and on the wall in the third floor corridor appears the bloody inscription "The Secret Room is Open, the enemies of the heir are trembling." Because of the ability to talk to snakes with Harry, all suspicions fall on him. At the same time, teachers deny the possibility of the existence of the Secret Room, in which, according to legend, one of the founders of the school, Salazar Slytherin, sharpened the most ancient evil.
‹
›
Home
View web version