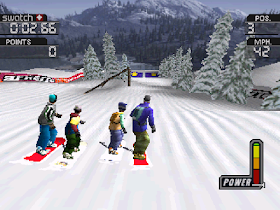 Genre: Sports
Perspective: 1st-person, 3rd-person
Sport: Snowboarding / Skiing
Published by: 989 Studios
Developed by: Idol Minds
Released: 1998
Platform: PlayStation (PSX, PS1)
This part is made much better than the first and second parts of the game. Movement has become smoother and more realistic. Snowboarders are now really sliding on the slopes, rather than flying over them without touching the surface. The slopes are also made very well. They twist and disappear in front of you, with no suspicious haze in front visible, unless it snows. Characters from previous versions of Cool Boarders look like papier-mâché figures compared to new ones. It is a bit frustrating that you cannot change athletes in new, self-created costumes. But still you will have enough variety in management, which will allow you to come to terms with an insufficiently large variety of wardrobe. Diversity in the game brings in such an aspect as the possibility of discovering new athletes and new boards with the accumulation of experience and skill, as well as more exciting descents. This makes the game more durable, since you have an incentive to conquer some heights, so that others will open before you. The number of tricks that you can perform in this game will amaze even professionals. Each of them looks very believable. With the help of tricks you can score enough points to get the main prize of the Champion. And if you manage to perform a chain of five tricks in a row, then points will flow to you like a river. Special descents have been prudently made for performing tricks on each mountain. There are also racing and slalom routes, and even a route with huge yellow buses stuck in the snow (you need to go around them).

Six tournament results are evenly divided into shooting gallery speed races and into three challenging competitions. Note that a board is recommended which is given at the start, but it is better to use secret boards when they are available.

Choosing the right board is the essence of success. The choice of your board depends on what you are going to do on it. Here are three basic tips: freestyle boards are slow, but good for tricks, alpine boards are made for speed, while free race boards are somewhere in the middle. Some boards become available only with certain wins and breaking records.

1. Do not try to do the tricks right away, but concentrate first on passing the track.
2. Draw a smooth line near the gate flags and reset the heavy turn to the minimum.
3. Use L1 and R1 to shoot down nearby opponents, but only at the beginning, thereby gaining an advantage.
4. If you made a forced stop, press X to quickly move on.

1. Use your time and try to pass as many more springboards.
2. There are a lot of bumps and slopes, so chase for quantity, not quality.
3. Do more tight turns and spins. Do triple combinations only on large slopes.
4. Sliding on the railing brings points, but tricks on slopes are more expensive.

Recommended standard board: Freeride and Alpine.