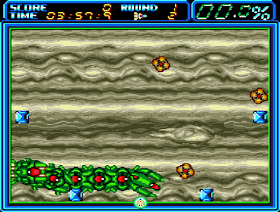 Genre: Action, Puzzle
Perspective: Top-down
Visual: Fixed / Flip-screen
Gameplay: Arcade
Setting: Sci-Fi / Futuristic
Published by: Taito Software Inc.
Developed by: Taito Corporation
Released: 1991
Platform: SEGA Genesis / Mega Drive
And this is an improved version of the classic arcade game with advanced graphics and sound. The idea of the game is still the same - to paint over as much territory as possible and not to get caught at the same time, at the same time avoiding Qix touching the line while you are drawing it.
The gameplay in principle remains the same, but among the monsters dominated by giant forms, occupying a lot of space.
Ultimate Qix - in America
‹
›
Home
View web version