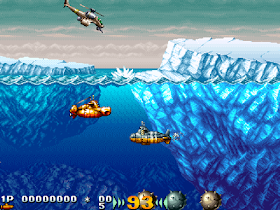 Genre: Action
Perspective: Side view
Visual: 2D scrolling
Gameplay: Arcade, Shooter
Vehicular: Naval / Watercraft
Setting: Sci-Fi / Futuristic
Published by: Kokopeli Digital Studios
Developed by: Irem Corp.
Released: 1996
Platforms: PlayStation (PSX, PS1), Arcade Machine
The advent of 32-bit gaming consoles has breathed new life into the now-classic shooting and shooting games made in 2D graphics. Once upon a time, In The Hunt was one of the favorite arcade games, and now its great PlayStation version has appeared. The updated graphics of this game are especially good in dynamic episodes; here even the game moments themselves are amazing, as are their magnificent animations. For example, when you surf enemy waters on a submarine, the numerous creatures swarming around you, as well as ships and airplanes that are visible above the water surface, are very impressive. In The Hunt can be played alone or together.
You must go through 6 combat zones. You can recruit various weapons, including water-to-air missiles, depth bombs, floating mines and destructive supersonic torpedoes. Moreover, you can also choose the musical accompaniment - either the old one, which caused a stir in the arcade version, or the new one, specially selected for the PlayStation.
‹
›
Home
View web version