In The Hunt (Arcade) 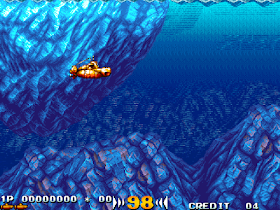 Genre: Action
Perspective: Side view
Visual: 2D scrolling
Gameplay: Arcade, Shooter
Vehicular: Naval / Watercraft
Setting: Sci-Fi / Futuristic
Published by: Irem Corp
Developed by: Irem Corp
Released: 1993
Platforms: Arcade Machine, PlayStation (PSX, PS1)
It was characterized by its unusual submarine scenario and its detailed Comichaften graphic style. The game was Irem's last arcade shoot 'em up.
In the Hunt originally appeared as an arcade game and based on the JAMMA system, later (from 1995), however, were also programmed for PC, PlayStation and Sega Saturn implementations.

The player steers a small submarine through different underwater worlds and has to defend itself against all kinds of opponents on water, on land and in the air and defeat the final opponent. For this purpose, the submarine is armed with torpedoes, depth charges and rockets, which can be reinforced by various power-ups or replaced by alternative systems. The submarine only moves in the water, but it can also swim to the surface to launch missiles flying under it.
Unlike usual 2D shooters, the levels do not scroll automatically from right to left, but only when the player has crossed a certain point towards the right edge of the screen. In this way it is also possible to stop to completely destroy all opponents. On the other hand, certain opponents repeatedly appear in the same place. In order to avoid being stuck at individual points of the level, the player is given a time limit to end the level. The supply of remaining time can be increased by collectable bonuses, but can never exceed the initial value of 99 seconds. In addition to this possibility of stopping the game scrolls in some places even after the destruction of a strong opponent on. Overall, the player is forced to progress rapidly through this system, resulting in an interesting game dynamic between fast forward movement and skilful tactics.
As a further game elements also labyrinth sequences, Seeminenfelder and icebergs appear, which must be overcome. The levels themselves include the Antarctic waters, a sunken city, a port of loading and the like.
The game has a multiplayer mode in which two players in the team compete against the enemies.

The game uses a raster graphics in a resolution of 320 × 240 pixels and also offers parallax scrolling. The graphics themselves are in a comic style and very detailed. All objects are very varied in color and also in small details such. B. animations caused by close explosions or swings by waves. In addition, the graphic also implements key aspects of the submarine scenario, such as Swell, rising bubbles or sea creatures in the background. The weapon animations are also very pronounced: torpedoes pull clearly recognizable traces of bubbles behind, while water bombs drop irregularly swinging down.
A similar graphics engine was used by Irem in Gunforce, where the same development team worked. This later programmed for SNK the graphically similar Metal Slug series.
‹
›
Home
View web version