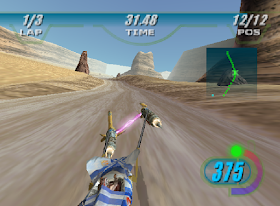 Genre: Racing / Driving
Perspective: Behind view
Gameplay: Vehicle Simulator
Vehicular: Hovercraft, Track Racing
Setting: Sci-Fi / Futuristic
Published by: LucasArts Entertainment Company LLC
Developed by: LucasArts Entertainment Company LLC
Released: 1999
Platform: Nintendo 64 (N64)
Star Wars Episode I: Racer presents different tracks on different planets, and also contains all the racers from the film, including additional, exclusive to the game. Races are carried out on aircraft called "Podracer" or simply "Pod." Subsizes of small size, controlled by one pilot, and driven by large jet engines. Under the player's character is equipped with an accelerator, which the player can activate manually. When activated, the internal temperature of the hearth engines increases, and if the acceleration is used for too long, they will be damaged. A player may also include an automatic repair, however during this time the maximum speed drops.
Three single game modes are available. In tournament mode, the player participates in the championship. For the completion of the races given a monetary reward, and the higher the place at the finish, the greater the reward. For money, you can buy parts for the car, repair droids, and open new tracks and racers. Free race mode allows the player to practice any previously open track using any open rider. Race time mode allows the player to participate in races for a time in order to set a record on the selected track. This mode is absent in the PC version, and in return, a player in the free race mode can disable computer opponents.
‹
›
Home
View web version