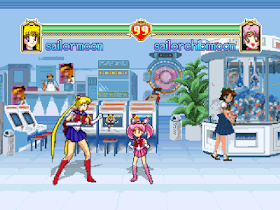 Genre: Action
Perspective: Side view
Gameplay: Fighting
Art: Anime / Manga
Published by: Bandai
Developed by: TOSE
Released: 1995
Platforms: 3DO Interactive Multiplayer, SEGA Game Gear
The game Bishoujo Senshi Sailor Moon S for Panasonic 3DO also known as Pretty Soldier Sailor Moon S is a fighting game based on the season of the anime cartoon Sailor Moon S. The game features nine women of the weaker sex. Sailor Saturn is not among them. Although by the way they dab each other in the game, they cannot be called as such. Each of the characters has its own arsenal of techniques and super blows, but the most important is the different magic that can be used during the battle. Zoom is used throughout, which gives its effect during the battle. The game is made entirely in 2D style, in exactly the same in which you can watch and cartoon.
The game has detailed information about each of the characters, only it is a pity that it is in Japanese. And there is also a music player in which you can listen to music from the game.
Cheat:
From the hero selection screen, go to the game mode together ("VS MODE"), move the cursor to Sailor Moon and press L + R + X. What to do next, see for yourself.
‹
›
Home
View web version