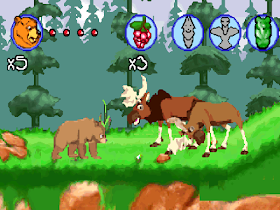 Genre: Action
Perspective: Side view
Gameplay: Platform, Puzzle elements
Published by: Disney Interactive
Developed by: Disney Interactive
Released: 2003
Platform: Game Boy Advance (GBA)
A strange case occurred with the hunter Kenai, when on the hunt he turned into a bear cub. Now he has to look at the world through the eyes of an animal, avoid the traps of hunters, one of which is his brother, and try to regain his human appearance. True one but can not cope, so help him in his difficult adventures.
‹
›
Home
View web version