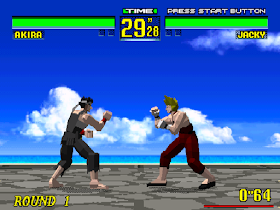 Genre: Action
Perspective: 3rd-person
Gameplay: Arcade, Fighting, Martial Arts
Published by: SEGA of America
Developed by: SEGA-AM2 Co.
Released: 1995
Platforms: SEGA Saturn, SEGA 32X
The gameplay was quite simple, with a steering lever and 3 buttons: one punch, one kick and one lock. With combinations of them it was possible to make special punches and keys, but none of the fiction type of games like Street Fighter II. Each character possessed a real and unique martial art style. For example, the character Wolf was an expert in American wrestling, Jacky and his sister Sarah dominated the Jeet Kune Do, Kage-Maru the JiuJitsu, etc. The only exaggeration in this game was the height at which the characters could jump.
The recreational game was transferred to the Saturn home console for its release to the market, being very faithful to it. It had a simile of sequel, "Virtua fighter Remix", with textures in the polygons and other improvements of graphic type. He was also transferred to the console "add-on" Megadrive 32X, with excellent technical results, but not so much in sales.
The great success of this concept has given Sega substantial benefits over the years, as well as a series of imitators who have enjoyed equal fame, such as Tekken, Dead or alive, and others developed by Sega itself as Fighting Vipers or Last Bronx. It has had several sequels in arcade, that although in principle they were destined to travel to the consoles of Sega in exclusivity, from the 2001 they have been distributed in other platforms.
There is also a series of Japanese animation on Virtua fighter (specifically, on Virtua fighter 2). In this series the characters appear characterized much younger than in the games, with their roles slightly or completely altered and showing a stroke or attack characteristic of the game in each episode.
‹
›
Home
View web version