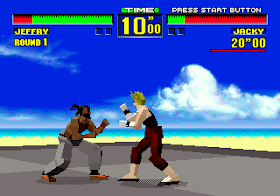 Genre: Action
Perspective: 3rd-person
Gameplay: Arcade, Fighting, Martial Arts
Published by: SEGA of America
Developed by: SEGA-AM2 Co.
Released: 1995
Platforms: SEGA 32X, SEGA Saturn
The game Virtua Fighter is the first part in this series of games, this is an arcade fighting game performed in polygonal 3D made by Sega AM2. It was one of the first 3D fighting games. 4D Sports Boxing came out before, but is a bit different genre. Unlike the version of the game for Arcade machines Sega 1, the number of polygons for the game console 32X was reduced. There are eight characters to choose from: Akira Yuki, Pai Chan, Lau Chan, Wolf Hawkfield, Jeffry McWild, Kage-Maru, Sarah Bryant, Jacky Bryant, Dural. You choose one of them and start the fight in the ring. You have the opportunity to win in two ways, completely deprive the opponent of the health scale or simply knock him out of the ring. This game immediately became a hit. To many, the game may seem like a game of Tekken.
Once in the era of Showa, the now defunct Japanese army intended to destroy Henry Pu-yi, the last emperor of the Ching dynasty. However, they were defeated by the imperial guard who used martial arts under the name "Hakkyouken". Later, the Japanese army secretly used the secrets of "Hakkyouken", in order to create the most powerful infantrymen on the basis of this martial art, making their own additions. Since then almost half a century has passed, and now the young man Akira Yuki travels the world to test himself.
The World Fighting Tournament is about to begin, and martial artists from all over the world, relying solely on their physical strength, participate in the tournament for a life and death. That would determine the fighter number 1. Round the tournament there is an intrigue planned by an evil syndicate.
‹
›
Home
View web version