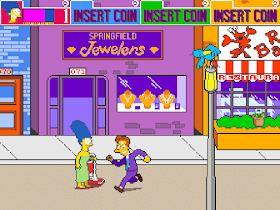 Genre: Action
Perspective: Side view
Gameplay: Arcade, Beat 'em up / Brawler, Platform
Visual: 2D scrolling
Published by: Konami
Developed by: Konami Industry Co.
Released: 1991
Platform: Arcade Machine
The plot of delirium, but curious: the little daughter of the head of the family of Homer, Maggie, kidnapped, because she accidentally swallowed a valuable diamond, which the main villain Burns ordered to steal his henchman Smithers, now it must be saved.
We play for one of the four members of the Simpson family (father, mother and children - Bart and Lisa), the passage for each of them is somewhat different. Homer (dad) fists and legs, Bart uses a skateboard, Lisa - a rope, Marge (mother) - in general some kind of incomprehensible thing (such as a hybrid of a hair dryer and a vacuum cleaner). Perhaps, Bart is more interesting to play: he has the highest speed of movement, the ability to dizzying jumps and more than the original way of dealing with enemies through his board on wheels. Passing the same for Lisa - the most "hardcore": despite the fact that the rope she uses as a whip with a long range and lethal force, her health (like a girl) is very small, so she does not need to die. During the game, you can also find a common weapon for all - for example, hammers, slingshots or bowling balls. Enemies (soldiers) are not particularly noteworthy, except that they often disguise themselves as ordinary townspeople and can attack, as they say, undercover, so you can not relax in the game for a second.
The levels of the game are quite diverse, each of them ends in charismatic and quite difficult to destroy the boss. Both the bosses and the backgrounds of the locations are probably familiar to the fans of the series, characters and places (it does not make sense to enumerate all this), which makes this game extremely entertaining for this category, but somewhat reduces its value for an "ordinary" player. Also in the general story, two mini-games are interspersed, where you will have to speed, competing with computer opponents, inflating balloons or awakening the chosen character.
The graphics are very beautiful, hand-drawn, accurate, the gameplay is moderately complex, but still the game is primarily for entertainment, rather than for training skills for passing complex platformers. Verdict - great, and it remains only to respectfully worship people who make such wonderful games on such an inconclusive primary source.
‹
›
Home
View web version