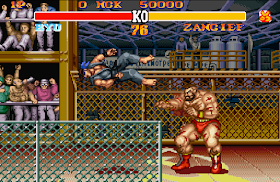 Genre: Action
Perspective: Side view
Gameplay: Arcade, Fighting
Visual: 2D scrolling
Interface: Direct Control
Published by: Capcom U.S.A.
Developed by: Capcom Co.
Released: 1993
Platforms: Super Nintendo (SNES), Arcade Machine
Street Fighter 2 Turbo is one of the best fighting games on SNES, a redesigned and updated version of Street Fighter 2 with new and redesigned old combos and tricks. The game has only 12 characters, but each of them has its own original fighting style. Arenas are also twelve, one for each character, but all of them are very different from each other: the military base, the Russian plant, Las Vegas ... The arenas are simply magnificent. AI opponents are held at a decent level - to each enemy need to look for an approach. Graphics are also very good - everything looks clear and beautiful. The plot line as such is not there - an underground tournament is held for the title of the best street fighter, in which the heroes of the game take part. At the end of the arcade mode, a short storyline is provided for each character. I advise you to go through the arcade mode for Zangief'a - in the end you will have a surprise. ;) By the way, in addition to the turbo mode in the game, the old mode Street Fighter 2 is preserved.
‹
›
Home
View web version