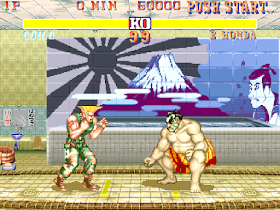 Genre: Action
Perspective: Side view
Gameplay: Arcade, Fighting
Visual: 2D scrolling
Interface: Direct Control
Published by: Capcom Co.
Developed by: Capcom Co.
Released: 1992
Platforms: Arcade Machine, Super Nintendo (SNES)
Street Fighter II: Hyper Fighting inherits elements of the gameplay from the previous game series Street Fighter II: Champion Edition. The speed of the gameplay of Hyper Fighting has increased compared to the previous parts of the series. As a result, pressing the right joystick buttons at the right time to perform special moves, as well as combined strokes, is even more difficult than in the Champion Edition.
Almost all the characters, with the exception of Gail and the four bosses (Balrog, Vega, Sagat, M. Byson), received at least one new special reception. This was done in order to compensate for a number of weaknesses that the fighters had in the previous games of the series. Other techniques were also modified and balanced. In addition, for each character was created an extra suit instead of those that were presented in the Champion Edition.
The endings that you can see after the end of the game in single player mode are identical to those that were available in the Champion Edition. However, a scene was added in which the game character stands on the winner's podium. Usually on the left and right side of it are located Bison and Sagat.
‹
›
Home
View web version