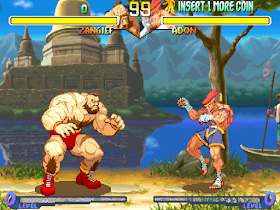 In general, the game modes are almost the same as in the original SFA, but there are some differences, in general, concerning the mode of arcade passage. Although, like in the original game, it represents a series of fights with eight computer opponents (including the final boss, which may be different for each opponent), this number under certain conditions can increase to ten. So, each fighter has a special secret opponent who can appear before a battle with one of the main opponents after meeting certain requirements and offer the player to fight with him, which accompanies the corresponding dialogue. In addition to the usual Akuma (which, unlike the original game, is available for selection from the very beginning), the game has its enhanced version - the so-called True Akuma, which, under certain conditions, may appear before the final fight (unlike the Super Street Fighter II Turbo and the original Street Fighter Alpha, where he performed as an alternative final boss) to test the player's character.

The structure of the combat system of the game is similar to the original SFA. From the original game went a characteristic three-level energy scale, Alpha Counter air block and recovery in a neutral state with Fall Breaking. In Alpha 2, each character now has two types of Alpha Counter, one of which is executed by pressing a button with a hand, and the other by pressing a kick button.
The main innovation of the game was the inclusion of the possibility to use the so-called Custom Combo, Original Combo mode, which replaced the chain combo system from the original game. The mode can be activated when the energy scale is filled with more than one division, and is performed by clamping the three attack buttons - two hands and one leg, or vice versa. The player, performing any series of basic and special techniques, can create an accidental combo in the allotted time displayed in a special timer above the energy scale. Of all the characters, the possibility of chain combos was retained only by Guy and Yuan, but in a limited number.
In Street Fighter Alpha 2 there are 18 characters, initially available on the selection screen. Among them, thirteen characters (including Bayson, Akum and Dan Hibiki), returned from the original Alpha and five added. For all returned characters, levels and cutscenes were completely redrawn, and completely new endings were created.
Also, the game includes the original suit of Chun Li from Street Fighter II, as well as the true Akuma (a reinforced version of the usual Akuma), appearing as a secret computer opponent.
In addition, the American release of the arcade version contains three additional characters - secret variations of Zangiev and Dalsima based on Street Fighter II ': Champion Edition, and evil Ryu, an alternative version of Ryu, using in combat Akuma's abilities.
‹
›
Home
View web version