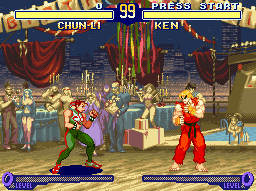 Genre: Action
Perspective: Side view
Visual: 2D scrolling
Gameplay: Fighting
Art: Anime / Manga
Published by: Nintendo of America Inc.
Developed by: Capcom Co.
Released: 1996
Platforms: Super Nintendo (SNES), Arcade Machine
The stunning part of the Street Fighter series, which could only be realized on Super Nintendo. At last the series at least here made up the competition Mortal Kombat, which completely eclipsed this epic on the Sega Genesis. A lot of characters to choose from, whose cartoon style of image emphasizes the brightness and personality of each character. There is no tournament in the game, each character with his own story, his life position and his motivation to participate in street fights. Every battle begins with some kind of opponent's movement, clamor or dialogue, and not with a simple stand. Here you can also play for the characters of the famous game Final Fight, and in the background see other different heroes of games from Capcom. The battle system is built from the accumulation of a special line, which can be used in different ways. It makes it possible to make a character a powerful reception or even a whole combination or, holding three special keys, perform a long series of combos, consisting of a dozen or more strokes. Also this line is used to intercept the opponent's attacks and counter-attacks. The game has chic arenas and backgrounds. Decent implementation. One of the best fighting games on this system, which diversifies the dark theme of Killer Instinct or Mortal Kombat. Trio of greatest hits! Recommended for all fans of this series and worthy of high-quality incarnations of this genre.
‹
›
Home
View web version