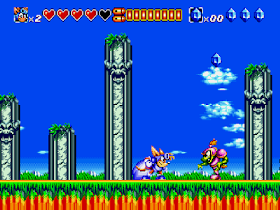 Genre: Action
Perspective: Side view
Gameplay: Platform
Visual: 2D scrolling
Published by: Konami (America)
Developed by: Konami Co.
Released: 1994
Platforms: SEGA Genesis / Mega Drive, Super Nintendo (SNES)
An excellent game, Konami's answer is Sonic. The game is somewhat similar to the game Sonic The Hedgehog. Continuation of the popular game Rocket Knight Adventures. We are still acting as the Opossum of a knight with a rocket knapsack. After the kingdom of Zephyrus was rescued by Sparkster from the empire of Devotindos, the kingdom is attacked again, this time the empire of Jedol, led by King Jedol, attacked them. The situation was aggravated by the fact that he sent rival Sparkster - Axel Gere, that he would kidnap Princess Cherry, the cousin of Princess Sherry. Sparkster again needs to use his jet pack to save the princess Cherry, and the kingdom of Zephyrus from King Jedol and his army of lizards. In the game you will not only "fly" around the round with a jet pack, but also manage a hefty robot. And as in the course of the game you will collect swords (klenki) by the type of the famous Excalibur. You need to collect different crystals that will give our hero energy.
The game is also known as Rocket Knight Adventures 2, Rocket Knight 2.
‹
›
Home
View web version