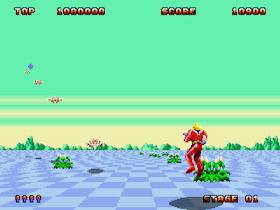 Genre: Action
Perspective: Behind view
Gameplay: Arcade, Shooter
Vehicular: Flight / Aviation
Setting: Sci-Fi / Futuristic
Published by: SEGA of America
Developed by: SEGA of America
Released: 1989
Platform: SEGA Genesis / Mega Drive
This is the continuation of the popular game from Sega, previously available only on Arcade machines.
This is a slightly reworked original game, it added a few new enemies, but this game is not much different from the first part. You can play this game, but you can search for a more interesting alternative.
The first part of the game was released on the platforms of Master System, 32X, and Saturn.