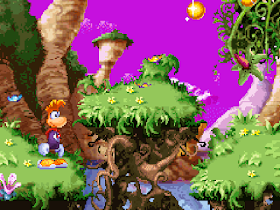 Genre: Action
Perspective: Behind view, Side view
Gameplay: Platform, Puzzle elements
Visual: 2D scrolling
Published by: Ubi Soft Entertainment Software
Developed by: Ubi Soft Entertainment Software
Released: 2003
Platform: Game Boy Advance (GBA)
The first two parts, very well received by the players, had more success than Rayman 3, due to the insufficient promotion of the new project before going on sale. The game has many references to the culture of the 60s.

The gameplay has remained almost unchanged since the days of Rayman 2, the following innovations add additional interest to the game:

The whole action of the game takes place in the so-called "The Glade of Dreams" and their countries-worlds.
Andre - the leader Zlum, is Lum, who grew up evil and ill-mannered. One night, he turns the Red (good) Lumov into Zlumov, creating an army of them. During this incident, Murphy, one of the Fay Council workers, discovers Andre. He finds Murphy hiding under a mushroom and chases after him. Murphy is confronted with Rayman and Globox, sleeping peacefully in a small clearing. He raises turmoil, Globox wakes up and they try to take to a safe place a languid and sleepy protagonist. During this process, Globox accidentally pulls out Reyman's hands, forcing Murphy to lift the hair and take him away. In an attempt to escape, Globox escapes from danger with the hands of Rayman.
Over time, more and more Zlum invade the forest. Reaching the entrance to the Council, Rayman and Murphy discover Globox, hiding in a barrel of plum juice. Reiman gets his hands back (again having the ability to accumulate and throw energy clots at enemies), and Globox, again frightened, runs into the Fay Council building, smashing the door: Andre and his two assistants are after him. In the end, Rayman and Murphy will recognize Andre’s sinister plan: he wanted to desecrate the Heart of the World with the intention of recreating this energy, but turning it into an army of Black Lumies. Despite this, the couple continues to chase, but in time, Globox accidentally swallows Andre flying by. Now the monitors of the Heart of the World are instructing Reiman to find a doctor to get rid of Andre sitting in Globox’s stomach.
Along the way, Rayman meets three "doctors" .. Otto Psi (stereotypical doctor, heals, imitating playing the guitar), Romeo Patti (the hippie who heals, playing Globox on the drum, like a drum) and Gonzo (a master of Oriental medicine) . Since all three doctors failed at the independent cleansing of Globox from Andre, they manage to get rid of him only after some collective work. But the villain manages to sneak away and, still not embarrassed by his plans for world domination, team up with Reflux, a warrior warlock and a shaman of the Knaar tribe, with whom Reiman fought in a duel to prove his worth in the Knaar race and stay alive. Left without power, Reflux despairs and wants to get rid of Reyman, so he decides to unite with Zlum.
In the final duel, Reiman defeats, destroying Reflux (who has merged with the knaar god Leptis), and back turns Andre into Red Lum. Soon after, Rayman and Globox return to the clearing where they were at the very beginning. Globox, already accustomed to Andre, shares his grief with Reiman about Andre’s return to the Red Lumas. Reyman tries to console him, saying that there really is no way to get Andre back. Both, laughing, fall asleep. In the subsequent scene, Reiman’s hands are found to be “true enemies” in the game — they separate from him while he sleeps and run away to go scare nearby Red Lum. Frightened Lum turns back to Andre, and even more evil. The rest of the story is already told in the game for the GBA Rayman: Hoodlums' Revenge (2005).
‹
›
Home
View web version