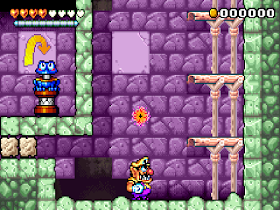 Genre: Action
Perspective: Side view
Gameplay: Platform, Puzzle elements
Visual: 2D scrolling
Published by: Nintendo of America Inc.
Developed by: Nintendo Co.
Released: 2001
Platform: Game Boy Advance (GBA)
Wario, the antipode of a good-natured jumper on mushrooms, decided to increase his wealth and went to the Egyptian pyramid for treasure hunts, and so badly lies. To his misfortune, he met a black cat in the pyramid, which led him to the center of the room with a hidden trap. Falling into the hole, Wario begins his journey in search of an exit from the tomb, along the way collecting small jewels found on the way. Possessing remarkable physical strength, he easily destroys the walls and stuns his enemies with powerful blows. Small game problems only make the game more interesting, and do not require a long-term solution or solution. Highly detailed graphics allow you to look on the face of the main character anger and greed, but what to say in this whole Wario.
‹
›
Home
View web version