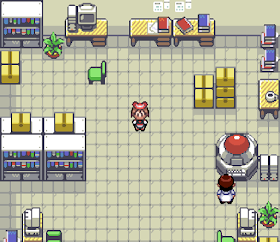 Genre: Role-Playing (RPG)
Perspective: Bird's-eye view
Gameplay: Japanese-style RPG (JRPG)
Art: Anime / Manga
Pacing: Turn-based
Setting: Fantasy
Published by: Nintendo of America Inc.
Developed by: Creatures, Game Freak
Released: 2003
Platform: Game Boy Advance (GBA)
RPG about Pokemon. This game is the first of a series on the GBA. In the game you will be offered to spend time with Pokemon trainers. You must become a champion by defeating coaches in city halls. For this you will need Pokémon. The game features more than 100 kinds of Pokémon, which you must catch. They all have their own characteristics. Pokemon must be constantly trained and developed so that they learn new attacks and become stronger. In the game there are a lot of trainers who will gladly want to try for the strength of your pet. Winning the battle, the Pokemon gets confidence in his master. He can even evolve with happiness. But the game still has a story. In addition to the trainers, we are confronted by the members of the Aqua team, who commit the worst crime in history - get in the way. There is a parallel version of the game - Pokemon Ruby. In this version, you can catch the following Pokémon: Lotad, Lombre, Ludicolo, Seviper, Lunatone, Sableye, Kyogre. Graphics and sound in the game are excellent.
‹
›
Home
View web version