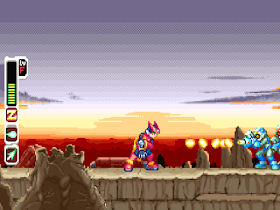 Genre: Action
Perspective: Side view
Visual: 2D scrolling
Art: Anime / Manga
Setting: Sci-Fi / Futuristic
Published by: Capcom Entertainment
Developed by: Inti Creates Co.
Released: 2003
Platform: Game Boy Advance (GBA)
Continuation of a very popular series with the ability to play two players and with numerous novelties. Players are again in control of the young hacker Zero, He now defends the robots known as reploids, who are ruthlessly attacked by police Neo Arcadia. Zero destroys his enemies with a famous light saber or shooting them from a long distance from Buster, performing jumps, pushing his legs off the wall, and other maneuvers; overcoming obstacles and dangers on their way. Players operate in deserts, forests, power stations, trains and find themselves in a variety of situations. Zero, acting successfully, is becoming more powerful and powerful, and at some point new abilities change even his appearance, and he takes various forms, which helps him to successfully complete missions. Now, just like the original game, depending on the success you get a rating of "S" or "A", which allows Zero to use special abilities in subsequent stages. The game also introduces new types of Cyber Elves, which help Zero timely detect traps and realize new abilities. Two player mode is available using the link cable. You can compete against each other on any of the secret stages open in the course of the game.
‹
›
Home
View web version