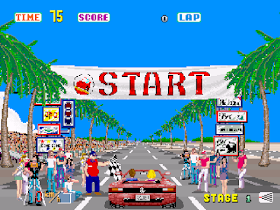 Genre: Racing / Driving
Perspective: Behind view
Gameplay: Arcade
Vehicular: Automobile, Street Racing
Published by: SEGA Enterprises Ltd.
Developed by: SEGA-AM2 Co.
Released: 1986
Platforms: Arcade Machine, SEGA Genesis / Mega Drive
The idea is to go through five stages before the end of time, to get it we would put at the controls of a Ferrari Testarossa red convertible with a blonde woman as a companion.
There are five other types of cars that we can find on the roads of this game:
1972 Volkswagen Beetle
1971 Chevrolet Corvette
1985 Porsche 911
1985 BMW 325i Cabriolet E30
A truck
There were a total of four furniture designs (two vertical and two sit-down), all of which were equipped with a steering wheel and gearbox plus acceleration and brake pedals. The steering wheel also had a response force. The cabinet in that position was produced in two versions: Normal and Mini. The large furniture that looked like the car in the game, used a drive motor to move the main cabinet simulating turns and movements according to the action on screen, like Sega After Burner II. There were two versions of sitting: the Deluxe (pictured), which has a 26-inch color screen and a custom molded seat, while the Standard appears a 20-inch color screen with a more simplified design.
The music of the game was composed by Hiroshi Kawaguchi, who had previously composed the soundtracks of other games designed by Suzuki and was part of the then stable band of Sega: the S.S.T. Band. Out Run was the first arcade video game that allowed the user to choose background music. It basically consists of three tracks: Passing Breeze (similar in style and tone to the music of popular jazz fusion groups of the 70s and 80s like Cassiopeia), Splash Wave and Magical Sound Shower (of Latin-Caribbean rhythms like Miami Sound Machine) , broadcast through an imaginary FM radio station received by the radio receiver in the Testarossa. Another track called Last Wave can be heard on the score screen.
The port for Mega Drive / Genesis of 1991 added an additional track titled Step On Beat, written by Masayoshi Ishi. The 2014 version for Nintendo 3DS features two additional tracks, Cruising Line and Camino a Mi Amor, composed by Manabu Namiki and Jane-Evelyn "Chibi-Tech" Nisperos respectively, using the original sound hardware of the arcade.
‹
›
Home
View web version