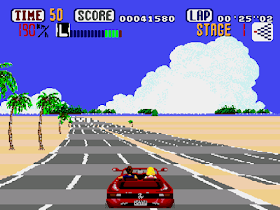 Genre: Racing / Driving
Perspective: Behind view
Gameplay: Arcade
Vehicular: Automobile, Street Racing
Published by: SEGA of America
Developed by: AM R&D Dept
Released: 1991
Platforms: SEGA Genesis / Mega Drive, Arcade Machine
The player drives the driver of the Ferrari Testarossa (in later versions the car became similar to the prototype Testarossa Ferrari Mythos), which rides with his blond girlfriend on the passenger's seat. Starting a trip on the Coconut Beach (English Coconut Beach), he must drive through four control points in a given time.
At the time of its release, the game was unique in its ability to choose the path of movement. Before each control point there is a fork, which allows the player to choose one of the two ways. (A similar branching system was also used in the TX-1 Atari / Tatsumi game of 1983, but in that game the choice of the fourth path determined the fifth way as well.)
There were two automaton designs - a conventional arcade machine with a rudder and gear lever, as well as with gas and brake pedals, and a version with a seat that more resembled the back of the Testarossa. The usual version also existed in two versions - full-size and mini.
The game was one of the arcade hits, and is considered one of the best racing games for arcade machines. Its popularity was caused by an innovative engine, the choice of music and the way of movement. An important role was played by the graphics, the rear view of the car, which gave players a greater sense of speed than in most of the previously released racing games, where the top view ("from the helicopter") was used. Like other Sega games of the time, such as After Burner, Space Harrier, or Power Drift, Out Out used the technology of scaling 2D objects on the screen of an automaton into 3D (Superscalar Technology), which was considered one of the foremost for a long time.