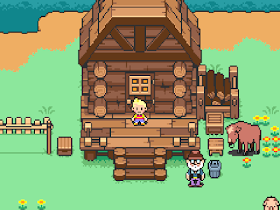 Genre: Role-Playing (RPG)
Perspective: Bird's-eye view
Gameplay: Japanese-style RPG (JRPG)
Visual: 2D scrolling
Setting: Sci-Fi / Futuristic
Published by: Nintendo Co.
Developed by: Brownie Brown Inc, HAL Laboratory
Released: 2006
Platform: Game Boy Advance (GBA)
If you remember, Mother 1 and Mother 2 were on NES and SNES, respectively. Now everything will be on GBA. From its predecessor, the game has preserved a unique atmosphere - the design of characters and the game type of terrain. Because of the Japanese language, it is difficult to understand the plot of the game in more detail, but much is clear from the actions of the characters on the screen. Necessarily like the fans of this series or exquisite RPG.
‹
›
Home
View web version