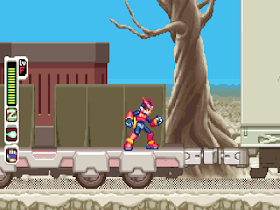 Genre: Action
Perspective: Side view
Gameplay: Platform
Visual: 2D scrolling
Art: Anime / Manga
Setting: Sci-Fi / Futuristic
Published by: Capcom Entertainment
Developed by: Inti Creates Co.
Released: 2005
Platform: Game Boy Advance (GBA)
The young hero Zero tries his best to restore peace between humans and riploids. In the country of Arcadia, fierce battles are fought, and Zero has to destroy numerous servants of the devil Vail. He can take the equipment of defeated enemies, combining the found details and thus improving his own weapons. The game is affected by the weather, and the player can change it in order to raise or lower the difficulty level. Zero has to fight with more than 40 different types of enemies on 16 levels, at the end of each of which he is waiting for a mighty boss.
‹
›
Home
View web version