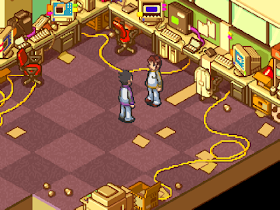 Genre: Role-Playing (RPG)
Perspective: 3rd-person
Visual: Isometric
Art: Anime / Manga
Pacing: Real-Time
Setting: Sci-Fi / Futuristic
Published by: Capcom Entertainment
Developed by: Capcom Production Studio 2
Released: 2005
Platform: Game Boy Advance (GBA)
This is the fifth time we have met in this wildly fascinating world of Mega Man (Rockman). The developers have prepared a lot of interesting things for us this time too, so it’s definitely not worth pouting for this part. She may not be very different from the first four parts, but she also has something to brag about and attract your precious attention. It is worth playing for everyone! By the way, as always, you expect two versions of the game - Team Colonel and Team Protoman. The differences here know what they are.
‹
›
Home
View web version