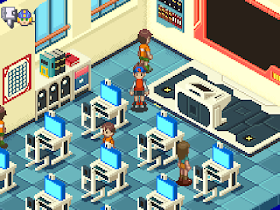 Genre: Role-Playing (RPG)
Perspective: 3rd-person
Visual: Isometric
Art: Anime / Manga
Pacing: Real-Time
Setting: Sci-Fi / Futuristic
Published by: Capcom Entertainment
Developed by: Capcom Production Studio 2
Released: 2002
Platform: Game Boy Advance (GBA)
The hero of the second series is also a young hacker named Lan and his so-called PET, a personal terminal called NetNavi. This is a special program that is built into the PET device. It is used to destroy viruses and fights with other NetNevi, which can be detected in hyperspace, as well as in various electronic devices. The action of this game begins almost immediately after the end of the events in the previous series. Now, Lan undergoes special training in order to become the official NetBattler, one of those who use their NetNevis in order to combat various cyber crimes and viruses.
‹
›
Home
View web version