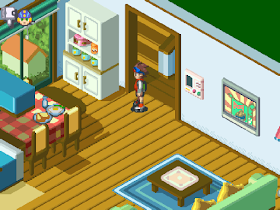 Genre: Role-Playing (RPG)
Perspective: 3rd-person
Visual: Isometric
Art: Anime / Manga
Pacing: Real-Time
Setting: Sci-Fi / Futuristic
Published by: Capcom Entertainment
Developed by: Capcom Production Studio 2
Released: 2001
Platform: Game Boy Advance (GBA)
The protagonist, a young hacker named Lan, who enters the superspace and operates there under the leadership of "Mega Man.EXE". This is the code name for Lana's personal digital assistant, who makes phone calls, receives e-mail, maintains a calendar, stores data, tracks news from around the world, and when Lan is in the real world, he talks to people, looks at various items, collects information and enters the cybernetic world through a computer located in his room, or in several other places. In this mode, he takes a familiar to fans of these games, the form of Blue Bomber and battles with dangerous computer viruses. He can buy, find or win in battle various chips and power-ups, in particular, such as armor and rate of fire. Battle chips are used, for example, to change the standard blaster to a sword, attack enemies or treat your character. The game requires patience, skill and, of course, good luck. Lan will be able to collect all 175 combat chips and restore the world in virtual space once and for all.
‹
›
Home
View web version