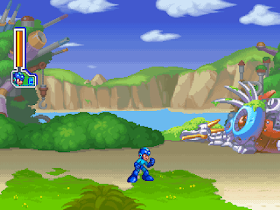 Genre: Action
Perspective: Side view
Art: Anime / Manga
Visual: 2D scrolling
Setting: Sci-Fi / Futuristic
Published by: Capcom Entertainment
Developed by: Capcom Co.
Released: 1997
Platform: PlayStation (PSX, PS1)
The popular characters of video games come and go, and only a few of them stay with us for a long time. One of the most respectable survivors of our screens - Mega Man, whose adventures withstood more than fifteen editions for different gaming systems. Now, developers from Capcom release it into 32-bit spaces in the game Mega Man 8 Anniversary Edition.
As in previous games, you are free to choose the order in which you will fight with eight bosses. Having defeated each of them, you take possession of the remaining weapons after it. True, in this version you first need to make a choice between the four bosses, defeat them one by one, and then fight with the others.
The storyline of the game was revived somewhat (before, many considered it boring). Evil Dr. Wily was able to control a giant mysterious robot. Mega Man, as always, should stop it. On the way, he meets with another robot - unknown, friend or enemy. But Dr. Wylie, in addition to the giant robot, has a group of robot masters, and with them you have to fight one by one. I must say, this is a very unusual and colorful company.
Perhaps the strongest of them is Sword Man, who has a giant sword in his hand. Fighting it, you at some point must act even inside the volcano, where every careless movement threatens you with ruin. There is in the game and has already become a traditional water stage, where Mega Man must demonstrate his new ability - to swim under water. The boss of this stage - Aqua Man'a - instead of a hand water hose. The most original-looking boss is Astro Man, who does not have legs; The lower part of his body has the shape of a hemisphere, and he soars above the ground. Two more spheres revolve around him. But do not think that you were in outer space - you just need to pave the way through a mechanical garden and a couple of labyrinths. Another boss - Grenade Man - is a grenade with arms and legs. Its zone is an industrial area with a scrap yard. The largest of the robot masters is Frost Man. The area around it is very slippery, and here you have several times to do snowboarding. Tengu Man - Japanese, a figure similar to a cow, but with a beak and tail; one limb is a triple sword. The most interesting at this stage is that it is very windy, so it is difficult to maneuver. To make your way to Clown Man, you must pave your way through a strange circus, crammed full of old enemies of Mega Man from past games; Only then on your way gets himself Prince of Clowns, in the arsenal of which - electrical attacks. Finally, Search Man looks, perhaps, most effectively. He is dressed in military camouflage, and in his hand he has a rocket gun. In addition, he has two heads speaking different voices, and he lives in dense jungles, so that Mega Man never gets to him.
Against so many powerful enemies Mega Man, of course, need help. Next to him is his faithful robot dog Rush, which is able not only to transform (including into a jet fighter or into a combat bike), but also to perform rather clever tasks - for example, to bring additional sources of energy. But the most valuable ability of Rush is to transfer Mega Man to special stages, where Mega Man can check himself in shooting and earn icons that bring him new friends. Among friends - the robot bird Beat, the robot shooter Auto and the robot arsenal Flip-Top. The latter will help you in flight, dropping bombs down to the ground. Between the stages in the shops of Dr. Light You can buy different useful items and weapons.
In Mega Man 8 Anniversary Edition, great graphics, entertaining plug-in movie sets and very good animation of all characters.
‹
›
Home
View web version