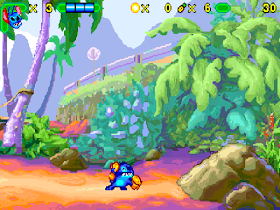 Genre: Action
Perspective: Side view
Gameplay: Platform, Puzzle elements, Shooter, Stealth
Setting: Sci-Fi / Futuristic
Published by: Disney Interactive
Developed by: Digital Eclipse Software
Released: 2002
Platform: Game Boy Advance (GBA)
At 12 levels of this action adventure players will act not only on the ground, but throughout the galaxy. The two main characters are Stitch and Lilo. In the course of the game you will need to switch from one to another, in particular, using Stich when you need to rescue the kidnapped Dr. Pestus. At the beginning of the game, you control Stitch and overcome the first few levels on earth, and then travel to outer space on the planet Junkyard, until you finally meet Dr. Pestus. Stitch is armed with intergalactic weapons with an infinite amount of ammunition. Along the way, he can collect Pineapple grenades, fight mini bosses, although it is not at all necessary to destroy all these aliens, you can carefully sneak past them. You will have to win such rivals as Bounty Hunter Bob, Junkyard Beast and Dr. Pestus. Lilo is armed with a very innocent weapon and she, as a rule, flees from an alien ship and uses her Scrump doll for defense. She, by the way, is very cleverly hiding, can act covertly, as well as teleport. Power-ups and various bonuses can be found on each level.
‹
›
Home
View web version