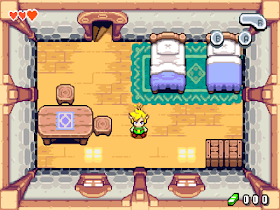 Genre: Action
Perspective: Top-down
Gameplay: Metroidvania, Puzzle elements
Visual: 2D scrolling
Published by: Nintendo of America Inc.
Developed by: Capcom Co.,
Released: 2005
Platform: Game Boy Advance (GBA)
The creators of the game made a kind of "hybrid", combining elements of different games of the Zelda series. There are also magical transformations of the protagonist, and various characters familiar from the games on Nintendo64, and fights in caves and temples with searches for keys, and battles with bosses, and all sorts of things that help in the adventure. The plot is this: another villain turns Princess Zelda into a stone statue, and your hero, accordingly, must remove this spell, for which he will have to repair the legendary sword and charge it with magical energy. Running in the game, as usual, with plenty, it's interesting to play and not very simple.
‹
›
Home
View web version