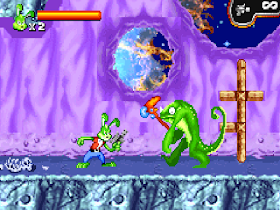 Genre: Action
Perspective: Side view
Gameplay: Platform, Shooter
Visual: 2D scrolling
Setting: Sci-Fi / Futuristic
Published by: Jaleco Entertainment
Developed by: Game Titan
Released: 2002
Platforms: Game Boy Advance (GBA), DOS
If you have not played Jazz Jackrabbit yet, then you missed one of the most interesting games on GBA. The plot of the game is trivial, you are a young green rabbit, captured by the chameleons, taking advantage of your supervisor's dream, you escape from the cage, and take possession of the weapon, starting to shoot the same green lizards. But your journey through the galaxy will not be limited to just one planet, by no means, each new world will be completely different from the other, with its architecture and backgrounds. The green rabbit moves quickly, knows how to jump high and stay in jumping, with the help of ears, helicopters, and the physics of the game, which is perfectly passed by the developers, helps you, if you run fast and try to brake, then by inertia you will go a few more steps forward. The arsenal of the eared is enough to shoot all enemies that you will meet on the way, in any case, you will have an automatic pistol with endless cartridges, and the remaining weapons will need to buy ammunition between missions on the space station for the money found or to extract at levels. Enemies will be armed not worse than you, sometimes even better, but this will not make them as agile as the green caudate. At each location you will be waiting for a teleport in the form of a carrot, and at the end of each level a unique boss.
‹
›
Home
View web version