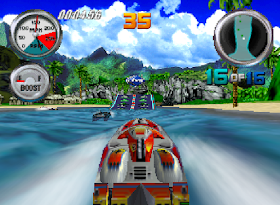 Genre: Racing / Driving
Perspective: Behind view
Vehicular: Naval / Watercraft, Track Racing
Setting: Sci-Fi / Futuristic
Published by: Midway Home Entertainment
Developed by: Midway Games West
Released: 2000
Platforms: Nintendo 64 (N64), PlayStation (PSX, PS1)
Midway did a lot of good racing for Nintendo64, and these water competitions were also a success. There are a variety of boats (initially quite unpretentious, but in the process of the game will be available and others) and waterways, both circular and rally style. On the tracks you need to collect blue and red Boost icons, which play the role of nitro and allow for a few seconds to increase the speed of the boat. Collisions with other boats and other objects do not entail serious consequences, which makes the gameplay fun and dynamic. Recommended for fans of exciting races.
‹
›
Home
View web version