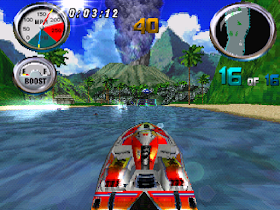 In Hydro Thunder, the player needs to choose one of the racing high-tech boats and on it to overtake rivals on the waterways, starting from the rivers of the Arctic Circle, and ending with post-apocalyptic and submerged New York.
Blue and red icons "Boost" appear on the tracks. They allow you to increase the speed of the boats, or use them for jumping through the trampoline. To use them, the player needs to press a button on the gamepad or keyboard specially for this purpose. Red icons are rare, as they give more fuel and acceleration. In addition, the player at high speed can ram other boats and throw them ashore.

Boats and tracks in Hydro Thunder fall into 4 categories: light, medium, difficult and special, and the latter are available with the help of special codes. Each vehicle has its speed and complexity in the management, and the tracks are difficult to pass. The version of the arcade game has only two bonus tracks: "New York Disaster" and "Nile Adventure"; as a hidden track was present «Hydro Speedway». In console versions, two more tracks were added - "Catacomb" and "Castle Von Dandy".

Versions of the game

The arcade version of Hydro Thunder uses the same seat as in the San Francisco Rush and Offroad Thunder, and also has a similar steering wheel borrowed from Cruis'n USA, but there are no pedals; The throttle is used instead. The game also has an unusual volume control, since the subwoofer is installed lower, near the seat. This arrangement of equipment makes the game more realistic.
In addition, Hydro Thunder has been ported to gaming consoles. For the port on the PlayStation, a career mode has been enabled, which is not available in other versions; in the version for Dreamcast, graphics were improved, the number of polygons in models increased, thus graphics became clearer and closer to the arcade version; Multiplayer in the port for the Nintendo 64 supports up to 4 players.
Later the game was re-released for Dreamcast as part of the Midway Arcade Treasures 3 collection and a budget version was released under the brand Sega All Stars. Porting was also carried out for personal computers. Midway Games had plans to create a collection of games for the PlayStation 2 called Hydro Rush, which included the games Hydro Thunder and San Francisco Rush 2049, but eventually they became available in Midway Arcade Treasures 3, published on Nintendo GameCube, PlayStation 2 and Xbox.

Midway had plans to create a sequel for Hydro Thunder, but the project was soon canceled. In January 2009, Raw Thrills, with the assistance of former members of Midway San Diego, who previously took part in the development of the original arcade version of Hydro Thunder, announced the creation of a spiritual heir to the game under the working title H2Overdrive. On March 26, 2010, Hydro Thunder Hurricane was announced for the Xbox Live Arcade service. Before that, Microsoft bought the rights to the series after Midway was acquired by Warner Bros. The game was released on July 28.
‹
›
Home
View web version