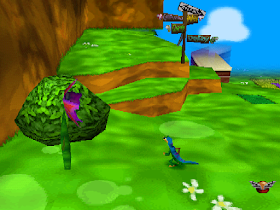 Genre: Action
Perspective: Behind view
Gameplay: Platform
Interface: Direct control
Setting: Fantasy
Published by: Crystal Dynamics
Developed by: Crystal Dynamics
Released: 1998
Platforms: PlayStation (PSX, PS1), Nintendo 64 (N64)
After the success of Tomb Raider in Crystal Dynamics, they decided to revive their masterpiece platformer with Gex in the title role, and to surprise the players, they decided to use the 3D engine of Lara Kroft. As a result, we got a solid 3D platformer, transferring the old mechanics to the new game. The game looks worse than the later released Spyro, however, I think fans of the genre this game will have to taste.
‹
›
Home
View web version