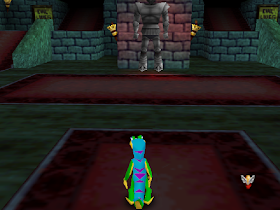 Genre: Action
Perspective: Behind view
Gameplay: Platform
Interface: Direct control
Setting: Fantasy
Published by: Midway Home Entertainment
Developed by: Crystal Dynamics
Released: 1998
Platforms: Nintendo 64 (N64), PlayStation (PSX, PS1)
After Gex defeated the television villain Reza, he went on an indefinite leave and enjoyed a quiet life. For two whole years, he lived all alone and reviewed on television the "Kung Fu Theater" and various other programs, sitting in a chair, drinking soft drinks and eating a popcorn.
But one day, quite suddenly for Gex himself, something happened to his TV: the screen began to flicker, give out noises and sometimes on the screen one could see Rez's face. After that, 2 special agents came to him, who started asking Gex for help: Res went back up again and returned to the Media dimension, and Gex is the only one who can stop him from implementing new sinister plans. But Gex ignored the appeal of the two agents, explaining this by saying that he had once saved the world. Then one of the agents hit him, after which the lizard lost consciousness.
When Gex woke up, he realized that he was in the interrogation room. The agents asked him what he knew about Reza. After Gex told them everything, they again asked him for help and offered him the case as a reward. When Gex discovered it, he saw that the case itself was full of money. Understanding the state of affairs and his own benefit, he agrees. The agents give him a card, tell him that they want Rez to disappear once and for all, and instruct him.
Gex leaves the building, and a beautiful woman agent who introduced himself as "Agent Extra", sees him off, wishes good luck and leaves him. And Gex is sent to the Media dimension. From this moment the game begins.
Being in Media dimension, Hex can get on different TV channels and different TV shows of different genres: Toon TV, Scream TV, The Rocket Channel, Circuit Central, Kung-Fu Theater, The Pre-History Channel, Rezopolis and Channel Z. stage game, Hex fights with Rez again, and defeats him again.
‹
›
Home
View web version