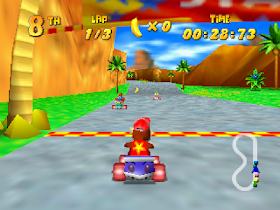 Genre: Racing / Driving
Perspective: 1st-person, Behind view
Gameplay: Arcade, Vehicle Simulator
Vehicular: Automobile, Off-roading, Track Racing
Published by: Nintendo of America Inc.
Developed by: Rare
Released: 1997
Platform: Nintendo 64 (N64)
Funny race of characters like Diddy Kong. The game consists of worlds, each of which includes several tracks: regular races with rivals and races with bosses. On many routes before the race there is a choice of a vehicle: a car, an air-cushion ship and an airplane. On each track there are bonuses, collecting which, for example, you can temporarily increase the speed or arrange a trap for the opponent. After passing the main game mode, the second game mode opens with an addictive gameplay - Adventure 2. After the release of the game in late 1997, in just two weeks, about 800,000 copies of the game were sold, which then, according to the Guinness Book of Records, made her "the fastest-selling game ".
‹
›
Home
View web version