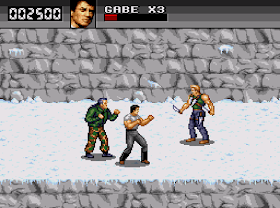 Genre: Action
Perspective: Side view
Gameplay: Beat 'em up / Brawler, Platform
Visual: 2D scrolling
Published by: Sony Imagesoft
Developed by: Malibu Interactive
Released: 1993
Platforms: Super Nintendo (SNES), SEGA Genesis / Mega Drive
On the movie "Cliffhanger", where the main role was played by Sylvester Stallone. For many, this actor, like his films, is a symbol of childhood. And the games based on his films turned out to be very good. Many remember Rambo, the same Cliffanger on Nes, Judge Dredd, Demolition Man on 16-bit. What about this game? That's what the developers have been able to do very well here, so this is the interaction with the weapon. In most cases, it will only be a knife, and from the other blows, as well as from the machine, the sense will be little. Sylvester Stallone now and then strive to push on the head numerous rivals. In the game, you must especially be able to defend yourself and use the unit. Maybe the developers wanted to more or less present a realistic Beat-Em-Up, a little closer to life and to the film itself. What the game does well, it's a fight for life. In the Beat-Em-Up, now and then we need to defend ourselves, grab for the knife at the first opportunity, and also run away from the avalanche, choose and calculate the speed of climbing the rocks in various cases, to the smallest millimeter calculate the distance of the jump along the rocks and ledges , towering above the abyss. Restoration of health is made with the help of a fire, and not chicken legs, knocked out of garbage or other food, just lying on dirty streets. Very interestingly implemented the character's behavior on the edge of the abyss. When the hero comes to the very edge he loses his balance, but it's not infinite, as in many platformers, here Cliffhanger will surely fall down, if not sharply to press back or forward, this moment also gives a little bit a moment of realism, survival and the same struggle for life . But, and if you think that I invented all this, then this game is not for you. In the game there is no dynamism, balance is broken, rivals are much stronger than their hero, etc.
‹
›
Home
View web version