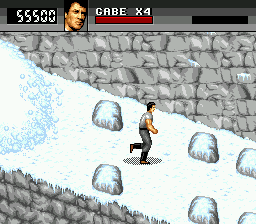 Genre: Action
Perspective: Side view
Visual: 2D scrolling
Gameplay: Beat 'em up / Brawler, Platform
Published by: Sony Imagesoft
Developed by: Malibu Interactive
Released: 1993
Platforms: SEGA Genesis / Mega Drive, Super Nintendo (SNES)
The game is based on the same movie as Cliffhanger. The main character Gabe (Gabe) whose role was played by Sylvester Stallone, should free his friend and deal with terrorists. The game has a lot of rounds, where you have to punch someone in the face. Of the weapons in the game, fists, legs, knives and firearms. The main weapon will be fists and legs. As befits a climber in the game here and there, one has to climb the rocks, run away from the avalanche, jump over gorges, and so on.