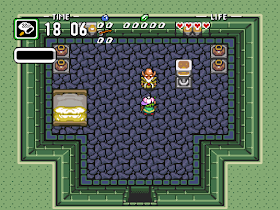 Genre: Role-Playing (RPG)
Perspective: Bird's-eye view
Gameplay: Metroidvania, Puzzle elements
Art: Anime / Manga
Setting: Fantasy
Published by: Nintendo of America Inc.
Developed by: St.GIGA
Released: 1997
Platform: Super Nintendo (SNES)
Ancient Stone Tablets is different from most other Zelda games as the game's central heroes are actually the avatars of the player's ID for the BS-X Broadcasting System, drawn into Hyrule, which is also true for BS The Legend of Zelda. The difference being that this time the player does not take the place of Link, but takes part in a new tale set after the events of A Link to the Past. The male character wears a green tunic (though others are later available) and a backwards baseball cap. The female character has long red hair and is otherwise almost exactly the same as the male.
‹
›
Home
View web version