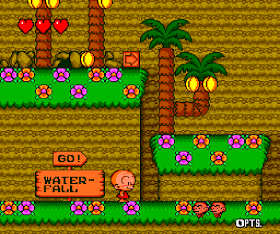 Genre: Action
Perspective: Side view
Gameplay: Arcade, Platform
Visual: 2D scrolling
Published by: Hudson Soft Company, NEC Technologies
Developed by: Red Company Corporation
Released: 1991
Platform: TurboGrafx / PC Engine
In this episode, the big-headed caveman is looking for half of the moon that has been stolen by the wicked King Drool. The multiple levels contain several specific and very varied zones, ranging from the level in the clouds to the caves while passing by an aquatic level. As in most platform games, Bonk has several abilities: the A button to jump, the B button to make a "bonk", a head shot forward that inflicts a deadly blow to most enemies; an A + B combo causes a more powerful shot that kills the enemies on which Bonk lands, with or without a destructive shockwave. By repeatedly pressing the B button in the air, Bonk pivots on himself and hovers, allowing controlled jumps and landings. Bonk can also use his big mouth to cling to surfaces and climb them.
Bonk's health is represented by heart-shaped containers similar to those in the Zelda series. Damage will cause Bonk to lose a certain amount of servings, but hearts can be filled with fruit again. Bonk can also collect empty containers that increase the total number. This is useful for increasing Bonk's health while the game becomes more difficult. There are also smileys, similar to the coins of the Mario series. These offer an extra life when you gather a hundred. One can also earn a living by picking up a small figurine with the effigy of Bonk.
A feature of the PC Kid series is the character's ability to evolve and take various forms by eating certain products. For example, Bonk turns into a Nuclear Bonk by devouring a small piece of meat. When he gives a whim, he shows a nuclear cloud that freezes the enemies at his touch. When it turns on itself and hovers, it is surrounded by a nuclear cloud. When he lands on his head, he freezes all enemies on the screen. By eating a big piece of meat or a second piece in the state of Bonk Nucléaire, he turns into Bonk Butthead. In this form, his head literally looks like a hindquarters, hence the name. He can then spit fire that destroys any enemy within range. Once in the air, it is surrounded by fire and when it lands on the head, it damages all the enemies and annihilates them often instantly.
‹
›
Home
View web version