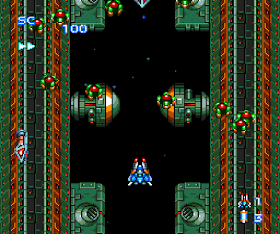 Genre: Action
Perspective: Top-down
Gameplay: Shooter
Setting: Sci-Fi / Futuristic
Published by: NEC Home Electronics (U.S.A.) Inc.
Developed by: Compile, Hudson Soft Company
Released: 1989
Platform: TurboGrafx / PC Engine
The game was one of the first games released for TurboGrafx-16. It is called by critics and players of one of the best games for the console in general and in its genre.

The game was developed based on the movie "Gunhed" studio Toho Sunrise, released in 1989. Mention of the studio and the name of the film was removed from the American version of the game.
The plot of the game was stated only in the instructions attached to the game. In the American version, the player opposed an enemy space armada called the Dark Squadron, and had to defeat eight Super-Arms.

The player controls the spacecraft. The game consists of nine levels, each of which has one or more bosses. Any hit to the player leads to a loss of attempt and re-passing the level, starting with the last reached control point. Additional attempts can be obtained by recruiting a certain number of points.
The game has four types of primary weapons, obtained by taking prizes remaining after the destruction of special capsules. The receipt of the weapon is confirmed by a voice insert with its name. Each weapon has several power levels. There are also prizes that add special features, such as player twins, homing missiles, shields, and an additional increase in weapon power. The player has a limited number of powerful bombs operating on a large part of the screen.
The player can at any time choose the speed of movement of the ship on the screen.
‹
›
Home
View web version