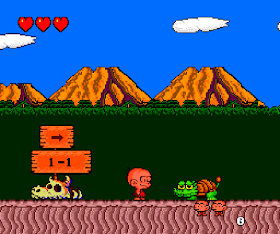 Genre: Action
Perspective: Side view
Gameplay: Arcade, Platform
Visual: 2D scrolling
Setting: Prehistoric
Published by: NEC Technologies
Developed by: Atlus Co, Red Company Corporation
Released: 1990
Platforms: TurboGrafx-16 (TG-16), Nintendo (NES)
Because of this series of games it was possible to buy the console itself! Mario rides through the pipelines, Sonic rushes like mad, but Bonk (in the Japanese version of PC Genjin) breaks his head with everything and everyone!
In the first part of this series, you wander through the ancient places where dinosaurs live, in order to save Princess Za. By the way, sometimes you can find pieces of meat - eat them faster! You will have some weapon for a while - either freezing or something.
Although the first part of the game in terms of graphics and sound is no better than other games on the PC Engine, but the gameplay itself is more fascinating.
‹
›
Home
View web version