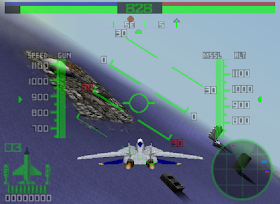 Genre: Action, Simulation
Perspective: Behind view
Gameplay: Shooter
Vehicular: Flight / Aviation
Published by: Video System U.S.A.
Developed by: Paradigm Entertainment Inc.
Released: 1997
Platform: Nintendo 64 (N64)
The game is an arcade-type simulator, which means that the goal throughout the game is to get as much score as possible. The points are rewarded by the number of allied pilots that have survived, in addition to the amount of defense and special weapons not used, and how much energy is still in the fighter. We will have available a type of basic weapon (usually a submachine gun), a missile attack, a missile defense weapon and a special attack. To pass a phase we will have to fulfill an objective that usually is to destroy a final boss and, in some missions, we will also have to defend a base of our own.

It is the story mode of the game and main mode of all there is. The phases that consist are:
The bonus stages:

We have three options that consist of:

It is the only way for two people. We will face each other and can choose between the three possible scenarios, the plane / character, the time, the amount of the defensive weapon and the amount of the special weapon.

In this mode we can choose one of the final bosses that we have faced and face alone against him.
‹
›
Home
View web version