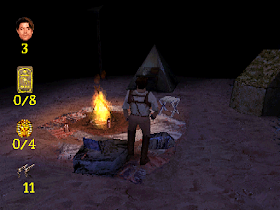 The game exactly repeats the plot of the movie: finding the "City of the Dead", treasure hunters accidentally resurrect from the dead accursed Egyptian Priest - Imhotep, executed by the servants of the pharaoh and embalmed alive. Resurrecting this monster, they doom the whole world to the "Ten Egyptian Curses" (End of the World). Stop Imhotep and prevent the world from perishing - their main goal.

The game is an adventure with a third-person view with elements of horror and puzzle. The game takes place exclusively in the Egyptian pyramid. The main task of Rick O'Connell for which the player is to play is to search for the important components of the artifacts - whether they are mirrors or pieces of tiles that will open the main door and go further. He is assisted by Evelyn Carnahan and Jonathan Carnahan, but they do not participate in the search for artifacts, but only wait for Rick O'Connell, later Ardeth Bey joins them. Performing tasks - Rick must collect the keys from the doors (the last one from the chest) in the form of a diamond, all of them can be 6-7 to the location to gain access to the chest with an important artifact. "Keys" fall out of mummies, and from the last mummy that should be killed in this area, but sometimes "keys" are already found lying on the ground or under traps.

Scarabs are the weakest enemies in the game. They attack one or more pieces, often hide in vessels. They inflict weak damage and die with 1 hit / shot, they are afraid of a torch with fire.
Workers - black miners, hollow the walls of the pyramid in search of valuable finds. Despite the fact that they are living people, they treat Rik unfriendly. Armed with a pickaxe, cause moderate damage and die easily, can put a block with their pickax.
Mummies are mummies of ordinary Egyptian slaves who died during the construction of the pyramid, and were buried there. Appear unexpectedly and with their characteristic very nasty squeal. They attack with their hands. There are several varieties in color, but the characteristics are no different.
Overseer - during life served as warders for slaves, after death they help their master Imhotep in the destruction of Rick O'Connell. Often appear from the walls. Armed with a huge hammer, which, when hit, causes significant damage, but the speed of the battle and the speed of the hammer blow is low, so the impact from them can be easily avoided. Also have good health.
A warrior with a sword - they were warriors during life, after death they remained. Armed with an Egyptian curved sword and shield. Because of the shield against them, the melee weapon is ineffective. They move much faster than ordinary mummies and cause more damage with their swords. There are several varieties in color, but the characteristics are no different.
A warrior with a spear is a mummy warrior whose main weapon is a long melee combat lance. Because of the long spear can attack from a fairly long distance. Also have a large shield, so the melee weapon against them is ineffective. There are several varieties of the color of weapons, but the characteristics are no different.
Warrior with a bow - mummy warriors, the main weapon of which is a battle bow. They can attack from a greater distance than other mummies.
Ghosts are the ghosts of dead, against which small arms are ineffective. Destroyed with cold weapons or powder.
The High Priest - during their lifetime were the high priests of Anubis, therefore they learned the secrets of magic. They are buried in the wall. They attack with magic balls, move slowly, are quite dangerous.

The statue of Anubis is a statue, which Imhotep revived.
Benny is Rick's Aide Connel. He betrayed Rika on the side of Imhotep. Attacks the running player with large logs, which he manages from the machines.

Imhotep - the main antagonist, at first immortal, but after reading the book of life becomes mortal. During the game can occur in the form of a mummy summons the mummies of helpers and flies away. It has extraordinary strength. With the help of spells, it activates traps. In the final battle, it attacks the player with magic balls.
Ankh-su-namun is the very first boss in the game. Flying through the air can hit the player. If it catches, it will cast spells of health. He is able to resurrect the mummies of his assistants.

Fists - a natural "weapon", helps to fight off an importunate enemy, but nothing more. Deal slightly damage.
The torch is a manual torch, serves to illuminate the path with the help of fire, which can be replenished by bringing the torch to other torches on the walls. It is also used to activate pictograms on walls and as weapons. There is initially from Rick, doing more damage than fists.
Sword - initially missing from the hero, but later Rick finds it. Effective against beetles, workers, ordinary mummies, wardens and ghosts. Against the soldiers is not effective. It deals medium damage and is much more effective than a torch.
The Golden Sword is a long sword, the best melee weapon. Appears near the end of the game. It is with this sword that Rico will pierce already the mortal Imhotep and throw into the lake of the dead.

The powder of life is a vial with a powder that has a very bad effect on the dead. Live does not deal damage. Rarely found in the game.
Dynamite - it explodes violently, but after the throw does not explode immediately and you can kill not only mummies, but yourself.

Revolvers - do moderate damage, effective against small groups of mummies.
Shotgun is a powerful argument for fighting mummies. The disadvantages are the low rate of fire.
Machine gun is the best weapon in the game. Has a high lethal force and rate of fire. Rick gets this weapon from Ardeth Bey near the end of the game.

In the game you can collect various items, such as gold masks, golden vessels, etc., which are hidden in large vessels, corners or hidden places, and also find cups for replenishing lives and signs of Anubis to increase the number of lives.
‹
›
Home
View web version