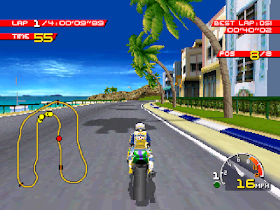 Genre: Racing / Driving, Sports
Perspective: Behind view
Gameplay: Vehicle Simulator
Vehicular: Motorcycle, Track Racing
Published by: Electronic Arts
Developed by: Delphine Software International
Released: 1997
Platform: PlayStation (PSX, PS1)
Fans of motorcycle races received a luxurious gift on a 32-bit platform! A huge selection of gaming opportunities, 16 different and in style and class of motorcycles (and what!), For any type of race, any route. In total there are ten trails - here and motocross, and Grand Prix and several city routes. Here we managed to do for motorcycles what was done in the best games-races for cars! And all this in 3D graphics! Very impressive racing game on motorcycles. Beautiful graphics, excellent script and numerous options - what else is needed!
Here you can play "Solo" or in the mode of two players with a split screen. At your service are 10 different trails, from jumps and jumps on potholes of dirt roads to stone stairs on the Great Wall of China. You can choose from two types of motorcycles, depending on the nature of the route. There are powerful high-speed cars, but there are road with high traffic. In each group, motorcycles differ in speed and quality of control. Of course, motorcycles obey the laws of physics, but experienced racers get up on them such that fans of racing again and again will return to this game.