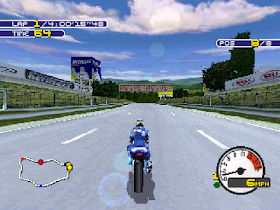 Genre: Racing / Driving, Sports
Perspective: Behind view
Vehicular: Motorcycle
Published by: Electronic Arts
Developed by: Delphine Software International
Released: 1998
Platform: PlayStation (PSX, PS1)
Put on your helmet and sit on a heavy-duty motorcycle that will give you a sensation of a powerful adrenaline injection, only by playing Moto Racer 2 you can get this experience without risking your health at all. It is this game that has the best motorcycles, the best racers and the best tracks. Despite a very large number of racing car games that have appeared on the market recently, starting with the absolutely fantastic game Gran Turismo to Colin McRae Rally, there is still a very large niche that can be filled and this niche is a race on bikes. As soon as the action begins in Moto Racer 2, you will see a very wide variety of tracks and cars, as well as various places where the races take place, including Desert Sahara, Amazonia and Britain. As in the case with the majority, the game from Electronic Arts, you will not immediately be scared by too many menus that fall upon the player with the full weight of their countless options. As a result, the game is very exciting. In addition, you will also have the additional opportunity to race in arcade, or in simulation mode; the only difference between them is that in the simulation mode, much more accidents occur, and the control becomes much more complicated. Although you will like the realism, this superficial feeling will very quickly disappear after you fly off your motorcycle for the tenth time. There are also other modes in the game: Moto X, Dual Sport, Custom, Ultimate. After you manage to gently break through the selection process - when you can sort through all the game options and find the fastest of them, you will take your super-bike by the horns and lead it against your opponent (s). I want to note immediately that scrolling the menu and downloading the actual game is poisoned by the fact that the download time is incredibly long. Fortunately, you can forgive everything as soon as you start the first of eight races.
Wonderful 3D graphics will soon alleviate all your problems when you drive your car along a magnificent road surrounded by incredible beauty landscapes. Although the game has only four options for review, one - from the first person and three versions of the chase: the first one, from the first person, is much better than all the others. When you start riding on your powerful steel horse, the speed of the game immediately becomes clear - it is so great that you can not even imagine until you try to play. You practically feel every gust of wind that is fluttering your hair. This is undoubtedly one of the most enjoyable aspects of the game, Motocross Mode will please you during the first few races, but it clearly lacks the speed and excitement that is triggered by the Super Bike Racing Mode. When you begin to move farther and farther along the hierarchy of these races, you will encounter different vagaries of weather - from clear sunny days, to wet nights and snowy slopes. If you already get used to a lot of adrenaline in the blood, then it's time for you to do such tranquil things as Motocross, in which you hardly have to withstand such loads as in super bikes, but you will have to use all sorts of tricks that will allow you to become rather sophisticated rider. As in the case of super-bikes, you will have eight trails, and each will have something specific, such that it will allow you to feel the true originality of the surrounding area. While in the situation with super bikes you could enjoy the crazy speed, now you have to fly on bumpy roads, evaluate meanders and turns that are more suitable for pedestrians, and not for motorized means. As in all other competitions, in Moto X you will see eight different races, with different thematic tracks. In addition, there is also a very wide variety of weather conditions - such as racing in the searing heat of the Sahara desert or bathing on the roads of the marshy Amazon, where the motorcycle sinks into the mud on the hub. With both of these biker categories, you can use the trace editor - so you can create new tracks or modify existing ones. Use this editor is not difficult, as well as the rest of the game, while this possibility can significantly prolong your charm from the game and give a chance to play enough with your friends on the specially created routes. The only problem with the game's fun is in the parameters of the route. You, unfortunately, are very limited in means - that is, you can not go too far from the roadway of most of the trails. This restriction is in some ways even useful, because it forces you to act more carefully. The very name Moto Racer very easily retains the title of the best motorcycle game for the PlayStation, so if you ever want to take your motorcycle by the horns - buy this particular game, there is no reasonable alternative for it. Very well thought out, fascinating sequel to the beautiful game.