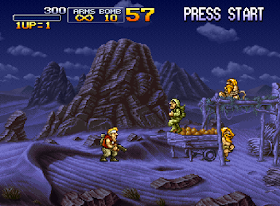 Genre: Action
Perspective: Side view
Gameplay: Arcade, Platform, Shooter
Visual: 2D scrolling
Art: Anime / Manga
Published by: Agetec
Developed by: SNK Corporation
Released: 2001
Platforms: PlayStation (PSX, PS1), Neo-Geo
Initially, the game appeared on arcade machines, but later it was ported to Neo-Geo, Sega Saturn and Sony Playstation. The first game in the series. The game is a classic Shoot 'em up. The player takes control of the soldier - Marco Rossi, or Tarma Roving (second player). The player has to wade through the levels, firing back from the enemies, saving the captives and fighting bosses at the end of each level. At some levels, the player can meet the Metal Slug, known as SV-001 (Super Vehicle), which can be controlled. The main characters can also perform knife attacks or kick. This does not allow them to die with the usual contact with the enemy. The opponents have similar ways of protection. Part of the elements on the screen are destroyed and when destroyed, new types of weapons and bonuses drop out. During the game, the player meets prisoners of war. Upon their release, prisoners of war may reward the player with bonuses or weapons. At the end of each level, the number of released captives is calculated, but if the player is dead, the player's release of the prisoners is reset. There is also a version with censorship: in it the blood is replaced by sweating.
In total, the game has five levels: a forest, a city captured by troops, a snow mountain valley, a canyon and a military base. Most enemies encountered in Metal Slug are enemy soldiers armed in accordance with their role. Also in the game you can meet mechanized enemies: tanks, self-propelled artillery, aircraft, armored personnel carriers and technical equipment. A great deal of humor in the game is added by the behavior of the enemies: they rest, sunbathe, eat food cooked at the stake or just talk to each other. Being caught unawares and noticing the player they are shouting loudly. The main villain is General Donald Morden, who appears on the second and final missions.
‹
›
Home
View web version